The former Tin Gypsy motorcycle club has everyone in Clifton Forge, Montana convinced they’ve locked their clubhouse doors and ripped off their patches. Everyone but Bryce Ryan. There’s more happening at the club’s garage than muscle car restorations and Harley rebuilds. Her instincts are screaming there’s a story—one she’s going to tell.

As the new owner of the small town’s newspaper, Bryce is hungry for more than birth announcements and obituaries. When a woman is brutally killed and all signs point to the Tin Gypsies, Bryce is determined to expose the club and their leader, Kingston “Dash” Slater, as murderers.

Bryce bests Dash match after match, disappointed her rugged and handsome opponent turns out to be an underwhelming adversary. Secrets are exposed. Truths defeat lies. Bryce is poised to win this battle in a landslide.

Then Dash breaks all the rules and tips the scales. 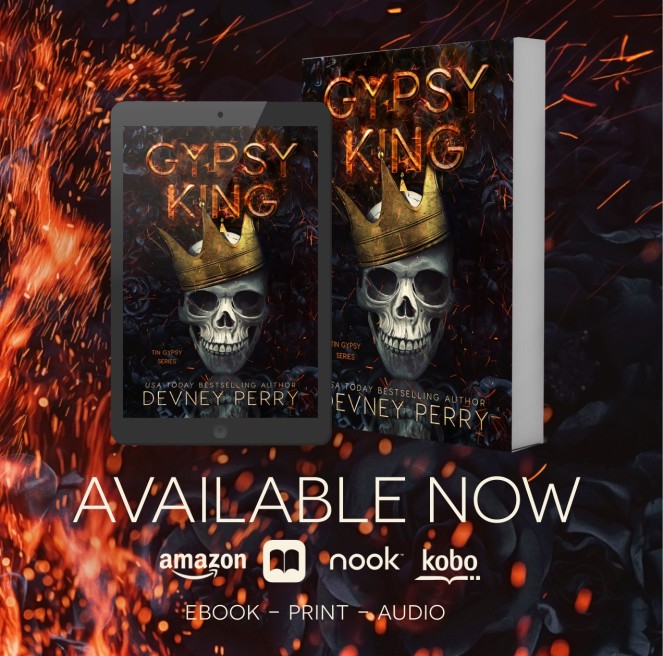 Devney Perry always writes a book that pulls me in and leaves me wanting so much more. Gypsy King is no different. I absolutely LOVED this book, LOVED!!!!

This book dives into the world of the Tin Gypsy motorcycle club, or what was left of them. Bryce has moved to Clifton Forge to work with her Father after deciding Seattle wasn’t the place she wanted to be. She wanted to be near her family, and to write stories for the paper that meant more to her. In returning, Bryce is determined she is going to write a piece that will prove to others and to herself that she is so much more than the girl who had a pretty face and delivered others news.

Bryce however, didn’t expect to be knocked off her feet by none other than Kingston Slater, or known to everyone as Dash. He’s handsome, a smooth talker, and downright sex walking around. She fights the chemistry tooth and nail, but finds herself struggling to keep away.

Dash is content with his life. He isn’t looking for a commitment. He has his garage, his friends, his dad and family out of town. He has been living for years outside of the club while running his garage, but when in walks this smoking hot new reporter everything in his world titls upside down, especially when his father is now the suspect of a murder. Dash must learn to trust and work with the enemy to save those he cares about and the secrets that he buried.

Devney has spun such an amazing enemies to lovers story that has the perfect amount of excitement, mystery, and a love story wrapped around men who should be the bad guys. I seriously devoured this book and am so excited for more to come with this series, and hopefully more secrets to be unveiled.